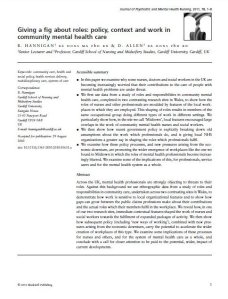 In a paper published in the Journal of Psychiatric and Mental Health Nursing at the start of 2011, Davina Allen and I drew on detailed, qualitative, research data to examine the relationships between policy, local organisational context and the work of community mental health practitioners. A version of the article, which carries the short title Giving a fig about roles, can be downloaded from the ORCA repository here.

Our paper drew on many of the social scientific ideas previously introduced on this blog in my Sphygmomanometers, remedial gymnasts and mental health work post, and which are rehearsed more fully in this earlier Complexity and change paper. Davina and I observed how recent mental health policy had triggered disruption in the system of work, with occupational groups advancing new, public, jurisdictional claims in response to perceived threats to their positions in a dynamic division of labour. One of the examples we gave was the response by sections within the profession of psychiatry to the policy of new ways of working, and its emphasis on ‘distributed interprofessional responsibility’ in particular.

The larger part of our paper reported new research findings. In the project from which it was drawn I had the opportunity to compare and contrast the organisation of community mental health services in two parts of Wales. With a view to understanding each site’s contextual features I read local policy documents, interviewed senior managers and practitioners and observed people at work. I was also interested in gaining a detailed, micro-level, view of the actual delivery and receipt of care. To this end I had permission from three service users in each site to follow their journeys through the mental health system, each over a period of four to five months. I interviewed all six about their experiences, and using snowball sampling mapped out the range of people providing them with care, whether paid or unpaid. The nurses, social workers, psychiatrists, psychologists, occupational therapists, general medical practitioners, pharmacists, health and social care assistants, family members and neighbours identified in this way were invited to take part in interviews focusing on work and roles. I also observed interprofessional care planning meetings and home visits, and read the written notes about each of the six service user participants made by practitioners.

As the full text of the paper reveals, in the analysis developed here we were particularly interested to explore the relationships between workplace characteristics and what practitioners actually did. Not unexpectedly, nurses carried out medication tasks, social workers (as the sole group able to do this at the time data were generated) fulfilled the ‘approved’ role during the operation of the Mental Health Act, doctors diagnosed and prescribed, and the sole participating psychologist provided structured therapy. 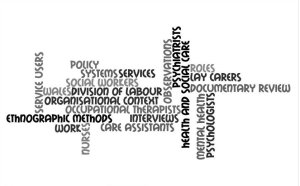 Beyond this we also found that the work of professionals was ‘patterned’ (to use the phrase coined in this context by Anselm Strauss) by immediate organisational forces. In one of the two sites nurses and social workers had enlarged ‘bundles of tasks’ (this being Everett Hughes’ term). This shaping of what people did could be understood with reference to a variety of contextual features. Key informants in this site described a particularly long and positive history of health and social care staff working together. This manifested during fieldwork in an approach to care provision which emphasised shared tasks and downplayed rigid demarcations. Single community mental health workers, rather than multiple representatives of different groups, tended to be attached to the care of individual service users. Health and social care organisations in this site were also small, lacking pools of staff from which people might be drawn to cover gaps left by departed colleagues. In this constellation of circumstances nurses and other members of staff fulfilled roles which were more ‘generalist’ than was the case in the other of the two sites.

Davina and I were interested to set our findings in the new and emerging context for mental health care. We pointed to larger policy trends favouring unpredictability in working practices, and to the idea that competency (rather than professional background) should determine practitioners’ eligibility to fulfil roles. We observed that ‘flexible, boundary-blurring, professionals competent to carry out multiple tasks may find favour with managers concerned with meeting local needs in local ways’. We reflected on the implications of this for continuity of care, capability and the preparation of new professionals. The paper ended with our thoughts on the challenges all this poses to professions and their jurisdictional claims.

In a later post I’ll return to this study, and in particular to what I learned about the experiences of the people whose unfolding care I followed as each moved through the different parts of his or her local, interconnected, system of mental health care. But that’s for another day.

3 thoughts on “Giving a fig about roles”