For an example of how health care tasks can become attached to different groups of people over time, then look no further than the measurement of blood pressure. One of the stories my grandmother told me when she was alive was how, whilst working as a nurse in the 1920s, whenever a new-fangled sphygmomanometer was to be used a doctor would come to the ward to operate it. The recording of blood pressure then became a task that nurses and midwives routinely did, and indeed support workers. Now it is something that anyone can do, using electronic gadgets purchased from the high street.

Tasks move around in mental health systems, too. Think, for instance, of the provision of formal therapies. Cognitive-behavioural family work used to be something which only a sprinkling of nurses did. Not any more. In this part of the UK, some of the tasks which only social workers used to fulfil as ASWs (approved social workers) during the operation of the Mental Health Act are now equally fulfilled by others working as AMHPs (approved mental health professionals).

Just as tasks appear and move between groups, so too do whole groups emerge, change and sometimes merge or even disappear. Remedial gymnasts appeared in the years after the second world war, before being subsumed within the profession of physiotherapy. Peter Nolan has told the story of mental health nursing growing from the keepers and attendants found within the asylum system. Community mental health nursing, as a particular sub-division, did not exist until the early 1950s. Now within the mental health system there are peer support workers, carrying out tasks which professionals and health care assistants might once have done. 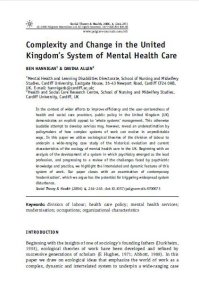 Davina Allen and I wrote about processes of this type in a paper called Complexity and change in the United Kingdom’s system of mental health care. This appeared in the journal Social Theory & Health in 2006, though a post-peer-review version of the article can also be downloaded from here. Davina is a nurse and sociologist (and was one of my PhD supervisors; the other was Philip Burnard), and in this article we drew on sociological theories to explore the changing division of mental health work in the post-war years. We used the ‘ecological’ ideas of Everett Hughes and Andrew Abbott to frame our analysis, about which you can read more here. These emphasise the division of labour as a complex and dynamic social system, which is responsive to all sorts of internal and external forces. Technology is one driver for change (for example, no-one could measure blood pressure until a device to do so had been invented. Mass production brought this work to the masses). Hughes had lots of interesting things to say about ‘mandate’ (the kinds of things groups say they ought to be doing) and ‘licence’ (what they actually do), and the ‘bundles of tasks’ which become attached to occupations at particular times and places. Abbott writes about the things that professions do to secure and advance what he calls their ‘jurisdiction’, in the face of claims made by competitors. ‘Jurisdiction’ refers to a group’s control over work.

In our Complexity and change paper Davina and I wrote about the historic success of the profession of psychiatry in drawing on biomedical knowledge to underpin and maintain a position of power in the mental health system. But as I’ve already suggested, interrelated systems of work are in motion, and in our paper we were also interested to explore sources of change. So we wrote, for example, about the challenges to biomedicine raised by dissident anti-psychiatrists in the 1960s and 1970s. We also wrote about the claims of mental health nursing to the possession of profession-specific knowledge underpinning the maintenance of helpful therapeutic relationships, and the appeals of social workers to having profession-specific ‘social model’ insights.

We also made quite a thing about the significance of community care for work and roles, and reflected on the expansion of state intervention in the mental health system (via a proliferation of policies) in the early years of this century. Now I think about it, there’s a link here between the wicked problems paper I wrote with Michael Coffey, and blogged about in both this and this earlier post. Policymakers’ recent formulation of ‘the problem’ as being one of unhelpful professional demarcations and restrictive practices has been a source of considerable disturbance in the mental health system of work. I’m thinking here, again, about the opening up of the Mental Health Act ‘approved’ role to nurses, psychologists and occupational therapists as well as to social workers, and what the longer-term implications of this might be. I’m also thinking about the division of labour consequences of peer support workers, and mental health nurses who prescribe medications, and graduates without ‘professional’ qualifications providing psychological therapies in primary care. Whatever the merits or otherwise of developments of this type, I think we should look carefully at their wider impact. Sometimes change can manifest in unpredictable ways.

And that brings me to another matter altogether: the intended and unintended consequences of action in interconnected systems. But that’s for another day, and for another post, entirely. Thanks for reading.