Here’s a snip from the report, summarising the self-reported difficulties experienced by the 2,290 people who took part: 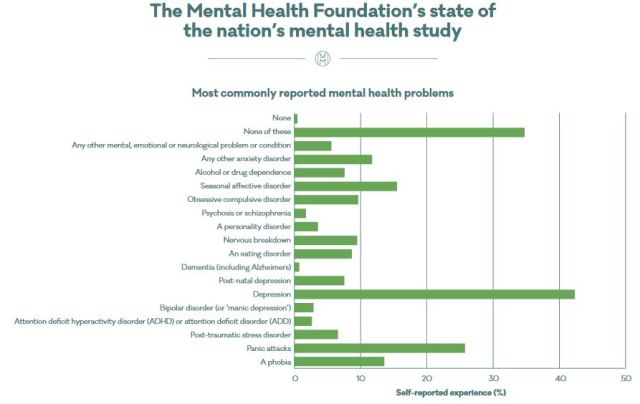 Extracted from Surviving or thriving

Using their NatCen data the Mental Health Foundation goes on to highlight major health inequalities. Almost three quarters of those on the lowest household income report experience of mental health difficulties, compared to six in ten of the wealthiest. A large majority of unemployed people responding reported experience of mental health problems, with women and younger people also particularly affected.

These findings are broadly in line with those reported in the most recent Mental Health and Wellbeing in England Adult Psychiatric Morbidity Survey, the data for which was collected in 2014. This is the latest in a series of studies dating back to 1993, involving (in the 2014 iteration) a sample of some 7,500 people. In the case of Surviving or thriving, the new (to me, at any rate) detail is the reporting of what actions people take to help themselves with their difficulties. Here’s another snip: 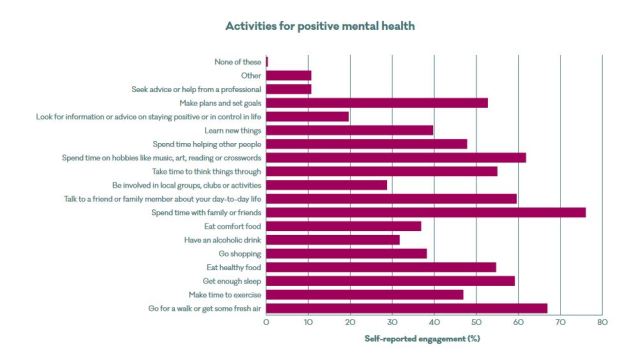 Extracted from Surviving or thriving

Family and friends, outdoor physical activity and hobbies look to be the three most-used strategies. I can’t say I’m surprised by this, and am reminded of the value placed in relationships with others by people taking part in COCAPP.

Elsewhere during Mental Health Awareness Week, The Guardian has published a number of pieces including this one on the shortage of mental health nurses and this one on Hafal‘s Gellinudd Recovery Centre (about which I previously blogged here). Coincidentally, this is also the month that the full and final report from COCAPP-A has been accepted for publication: well done Alan Simpson for leading this work. This mighty tome, reporting from our cross-national study into care planning and coordination in acute mental health inpatient settings, has now proceeded to the production arm of the NIHR and is scheduled to appear in gold open access form towards the end of the year. In the meantime, work is progressing to produce papers for journals. More on these to follow in due course.